To print this article, all you need to do is be registered or log in to Mondaq.com.

The Nagoya District Court has returned a verdict of not guilty to defendants in a trial for leaking information about the development of sensor technology. The defendants were former executives of Aichi Steel Corporation, a Japanese steelmaker affiliated with Toyota Motor Corporation. Aichi Steel had sued the former executives for violation of the Unfair Competition Prevention Act in light of the disclosure of trade secrets. Aichi Steel (Plaintiff) alleged that the Defendants disclosed the technical information regarding the equipment needed to produce sensitive magnetic sensors to an electronic component manufacturer, which is a business partner of Aichi Steel, by drawing it on a board White.

The court ruled that the information was too abstract and generalized and therefore only a combination of selected mundane methods. Thus, such a thing can be easily devised by one skilled in the art and cannot be determined as a trade secret. The defendants had asserted that the information was not trade secrets because the technical data in question was clearly common technical knowledge for a machine manufacturer and not valuable information from which to gain a competitive advantage.


The prohibition includes the unlawful act of obtaining trade secrets that meet the above requirements, as well as their use or disclosure to third parties for the purpose of maliciously gaining profit.

The court did not find the third requirement (not publicly known) on the technology allegedly disclosed in this case. Therefore, the technology was not considered a trade secret and the defendants were acquitted. The court also said that Aichi Steel’s act of seeking protection for common information is expedient and the lawsuit was unreasonable. The ruling could be seen as a warning against overbroadening the interpretation of trade secrets.

According to statistics published by the National Police Agency in Japan, the number of arrests for improper acquisition of trade secrets is increasing every year. Among other things, the number of cases in which information is inappropriately disclosed by a departing employee is on the rise. In a survey conducted by the Japan Information Technology Promotion Agency in 2020 regarding the state of trade secret management, the most common cause of information leakage was “deletion by a departing employee”, which represented 36.3% of the 2,175 companies that responded to the survey. This may be the result of increased labor market mobility. As economic security to prevent leakage of advanced technologies held by enterprises gains importance, enterprises are required to take even stronger measures as well as a strict and careful interpretation of the scope of trade secrecy. 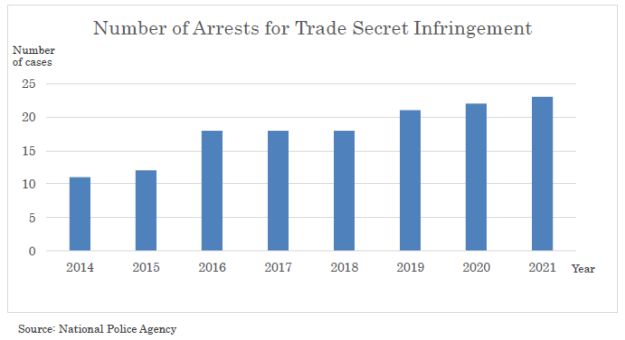 The content of this article is intended to provide a general guide on the subject. Specialist advice should be sought regarding your particular situation.

The Patents Act 1970, along with the Patent Rules 1972, came into force on April 20, 1972, replacing the Indian Patents and Designs Act 1911. The patent law was largely based on the recommendations of the report of the Ayyangar Committee headed by Judge N. Rajagopala Ayyangar. . One of the recommendations was to allow only process patents for inventions related to medicines, foodstuffs and chemicals.

WIPO defines a patent as an exclusive right granted for an invention, which is a product or process that provides, in general, a new way of doing something, or offers a new technical solution to a problem.

College and university enrollments plummeted across the United States this spring, deepening an ongoing crisis that many believe is showing signs of rebounding now. “The decline in college enrollment appears to be getting worse,” said Doug Shapiro, executive director of the National Student Clearinghouse Research Center, which released its latest enrollment numbers Thursday. “While there […]

Traders Watchlist: Top 12 Data Points to Know Before the Opening Bell on December 30

[ad_1] zeenews.india.com understands that your privacy is important to you and we are committed to being transparent about the technologies we use. This Cookie Policy explains how and why cookies and other similar technologies may be stored on and accessed on your device when you use or visit zeenews.india.com websites that link to this policy […]